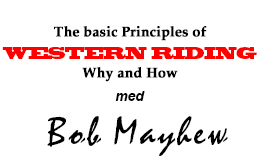 Bob Mayhew holds judging cards with the AQHA, APHA, NCHA, and NRHA, and he judges on an international level at some of the world's most prestigious events, such as the NRHA Futurity. He's a British Western horse trainer, but don't hold his accent against him. (Besides, it's barely noticeable.)

What he has to say and how he delivers the material is what's important, and Mayhew shines when it comes to explaining complicated information in an easy-to-understand format.

The 90-minute video covers a lot of ground, from handling foals to performing complicated reining maneuvers. Bob does an admirable job of touching on the highlights and most important facets of training a horse. It's a steady progression, built on a solid foundation.

One of the strengths of the tape lies in Mayhew's demonstration of the right and wrong way to do things. He shows the most common mistakes people make when riding horses and how to correct them for better performance from the horse.

His language is simple and straightforward, and his ideas are presented in a way that encourages anyone to give his methods a try. He does not get bogged down in complicated verbiage and ethereal ideas that would confound even the most accomplished horseman. He leaves the viewer thinking that he or she can achieve a high caliber performance from their horse.

There are sections on the English horse and the trail horse, as well.

The tape was produced in Sweden by VISUELL KOMMUNIKATION AB, and the sound and picture are of the highest quality. Mayhew's training facilities look just like any United States establishment, and with the exception of Bob's slight accent, you'll think things are downright American.

The same expertise that allowed Bob Mayhew to be the first European to judge a Western event in America makes the video a valuable possession for anyone interested in Western performance horses.

An outstanding horseman that has judged numerous events in America including the N.R.H.A. World Championship Futurity four times shares his knowledge of basic training in this wonderfully produced video. His subtle, soft approach is outstanding and certainly the way to achieve excellence.

This is a European video tape by Bob Mayhew, a Western horseman who calls Great Britain home. He is a good horseman that takes you through the basic gentling of the foal through round pen work of the older horse to develop a light, round and responsive riding horse. Mayhew is a reiner and does a very fine job.

The basic training would be useful for a horse intended for any sport, be it pleasure, trail or reining. One of the schooling maneuvers used by Mayhew is what he calls "a snake trail," known as a serpentine on this side of the Atlantic.

If not for a guest speaker at the first part of the tape, and for the scenery, you'd never know Mayhew was riding in merrie olde England. His skill level makes him competitive anywhere a stock saddle is used.

This tape is highly recommended. It ends with a dazzling performance at a horse show in which Mayhew's friend, Larry Kasten, does a spectacular job with a very fancy horse. It's a pleasure to watch.

You know Western riding has ”arrived” when you’re learning it from an Englishman.

Bob Mayhew not only caught the early wave of an exploding international fascination with Western horse breeds and riding, he mastered it so well, he’s the only non-North American invited to judge (four times) the prestigious National Reining Horse Association’s World Championship Futurity in Oklahoma City.

He also holds AQHA, APHA, and NCHA judging cards and has one of the best ”basics” videos on the market offering safety tips and valuable advice.

”The Basic Principles of Riding Western – Why and How”, a 90-minute tape, communicates the borderless bond of horse sports in an exceptional instructional presentation made even more delightful by some colorful expressions like ”kiss the horse” (clucking) and ”snake trail” (serpentine), which make you feel you’re taking a Mayhew clinic in Europe, sans the airfare.

Intrigued by Western riding after trying out a saddle in the late 1970s, Mayhew initially got help for the seat position and balance from a British dressage rider (there were no Western trainers then in England).

THE BASIC PRINCIPLES OF RIDING WESTERN-WHY AND HOW

Visuell Kommunikation AB. If you’re a beginning rider wanting to learn the basics of Western horsemanship, this Swedish produced video is a necessary addition to your collection. It’s also a worthwile refresher correct for experienced riders training their own horses.

In this 90-minute program, British trainer and internationally known judge Bob Mayhew takes a wealth of information and delivers it in a thoughtful, user-friendly format. Divided into five sections, the video features gradual demonstrations on foal handling, bitting basics, round-pen techniques, lungeing, suppling exercises, and such advanced maneuvers as rollbacks and sidepassing.

Also included are tips for training the trail-riding or hunt seat horse. Using a variety of horses at different training levels, Mayhew does an excellent job of explaining and demonstrating the do’s and don’ts of Western-style riding.

He also tells you how to correct common mistakers – something many trainers forget to do in their videos.

Mayhew’s down-to-earth philosophies and easy-to-follow instructions leaves you wanting to head to the barn and try his methods. Superb sound and production quality add to this video’s overall excellence.

What do you get when a Swedish company produces a video about Western Riding that features a veteran British horseman?
The answer is: An excellent learning tool that is enjoyable to both listen to and watch.

This video features the techniques of all-around performance horse trainer Bob Mayhew in his native England. Mayhew has competed in horse shows all over Europe, and holds judging cards in four horse associations, including the APHA.

The result is a visual production in which the horses are beautiful and Mayhew's advice solid and gentle. This is a good addition to anyone's training library.

Bob Mayhew has done it again.
Like his book "The Art of Western Riding", this video takes the horseman of whatever level of expertise, through the steps of starting the young horse in clear, concise terms that anyone can understand.

Bob does an excellent job in this video and his methods of teaching come across very well. It is easy to understand and the quality of the video is one of the best I've ever seen. Bob is using only green horses which makes it easier for someone to understand rather then watching the perfect horse.

It reaches the large group of people that need the most help, the beginner and the intermediate rider although an experienced rider also can gain lots from it.

The tape is full of good information!